Update: there is a petition gathering signatures to ask for a change to the guidelines. https://www.change.org/p/sonoma-county-office-of-education-changing-air-quality-standard-for-school-closures

Update 2: My response to some comments about assuming students’ home air quality is better than schools is at the bottom below references . Click to jump to the update

Language impacts understanding. We cannot discuss or understand that for which we don’t have words or context. At the Santa Rosa City Schools board meeting on Wednesday, November 14th Superintendent Diann Kitamura stated in her report that, “We don’t have an Air Quality Index … for children. The AQI that has been put out is actually for adults.”  In making your recommendations you used a table that was centered around adults, not children. I think that this is the piece that was missing during your discussions on November 13th that led you to set 275 AQI as the level for school closure. A level that I believe is much too high for student safety.

I understand the need to balance the health and safety of children with their educational needs and the parents’ need to work. On Friday the 16th my children’s school was closed while my school was still open and it added a lot of stress into my family’s day figuring out child care on almost no notice. However, I strongly believe that we need to err on the side of protecting our students’ health. The long term effects on children after being exposed to very unhealthy (150-200 AQI) or hazardous levels (>200 AQI) of air pollution is severe. Our schools are simply not equipped to protect students from dangerous levels of pollution. On your guidelines under Unhealthy for Sensitive Groups (children) you state “All doors and windows must remain closed throughout the day.”  This is literally impossible at any school site that has portables or requires students to go outside to access the restroom or to change classrooms. Every school site that I have visited in Sonoma County has at least one of these issues. This makes it impossible to protect our students appropriately at any site with these issues. I teach at an elementary school in a portable. On Friday my door was opened at least thirty (30) times over the course of the day. Every time the door was opened the unhealthy air, including visible pieces of ash, swirled into the classroom. The PurpleAir sensor located at the Sonoma County Center, 2000 ft from my school, started the day at 185 AQI and rose as high as 238 AQI at 11:20am as all of the students were required to go outside in order to walk to the cafeteria for lunch. How is this better than having students safely at home?

As a parent and as an educator I implore you to immediately reconvene the superintendents and revise your guidelines to align them to the revised chart I supplied where children are the focus. Set the mandatory closure rate to 200 AQI and give districts the discretion to close between 150 and 200 AQI. This will better protect our students while giving districts the flexibility to make the call about closing their school sites the night before allowing families more time to address child care. I request you take these actions immediately as other counties are looking at our guidelines and it is essential that revised guidelines be made available before they use your current ones to put their students at unnecessary levels of risk. Indeed Mendocino County has already copied Sonoma County’s recommendations.

Thank you very much for addressing this issue immediately. 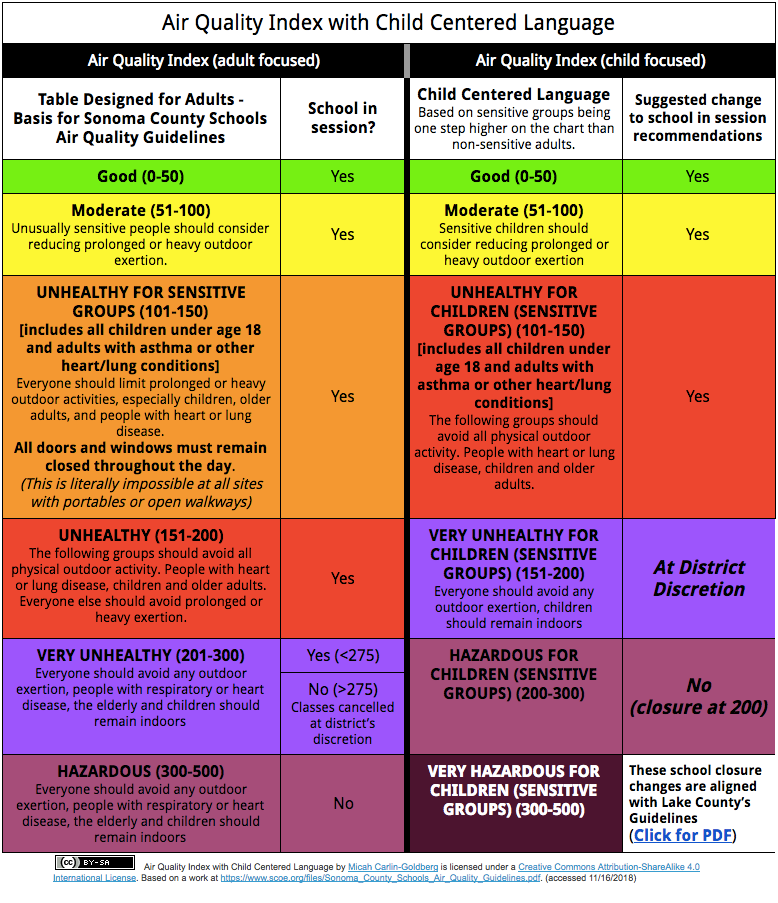 Air Quality Index with Child Centered Language by Micah Carlin-Goldberg is licensed under a Creative Commons Attribution-ShareAlike 4.0 International License.
Based on a work at https://www.scoe.org/files/Sonoma_County_Schools_Air_Quality_Guidelines.pdf. (accessed 11/16/2018)

A couple of people gave me feedback that wrote this piece assuming that they have better air quality at home.

I did not assume that students have great air quality at home. I believe that my students get less exposure staying at home then coming to school even with possible poor air quality at home. On Wednesday one of our buses was late picking up in the morning (not unusual) so all of the students from that bus spent 20+ minutes standing on the side of the road waiting in the bad air. No masks. Others walk or ride their bikes to school. No masks. They come to school and in the case of the upper grade students are in portables that are ancient with ancient HVAC systems. Even if the HVAC were new, the door to the outside gets opened 30+ times even while doing everything in our power to keep the door shut as much as possible. They have to walk outside to use the bathroom. They have to walk outside to go to the cafeteria for lunch. On Friday the AQI was 238 when my class walked to lunch. One student had a mask out of 26. We have 420+ students at my site. I saw maybe a dozen masks total on all students at dismissal.

When I wrote the letter I didn’t assume my students had great air quality at home. I looked at the conditions they were required to endure by coming to school and determined they were better off at home when the AQI is above 150.

As a side note. Three of the HVAC systems at my site either failed entirely or had to be shut down because they were pushing visibly smoky air into classrooms on Wednesday. The district is working on fixing them but they weren’t fixed by Thursday and in one case by Friday. On Friday a fourth one started spewing a chemical smell.

This is not unique to my site or my school district. Our schools in Sonoma County are old and run down, which makes them much less safe than anyone who doesn’t work at a school site daily understands.

None of this is to say that the school districts aren’t doing their best for students. Santa Rosa City Schools is in the process of upgrading all air filters in the district to MERV 13 standard which stops the 2.5PM pollutants (the current MERV 8 do not). That does not mean that there isn’t more that can be and needs to be done.