Note: I wrote most of this a few weeks after the EdCamp. It is now more than two months later. I definitely need to subscribe to the habit of writing a post in one sitting and posting it right away.

I have been distracted from writing this for a couple of weeks now and I just need to pound it out and get it done or I won’t ever get to it. Because as Kevin Brookhouser said in his book The 20 Time Project: 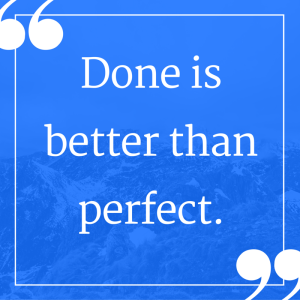 When I went to EdCamp East Bay earlier this month it was my first EdCamp. I went only vaguely knowing what I was letting myself in for. Earlier this year I went to a Google for Education Summit put on by EdTechTeam (@edtechteam) and it rocked my socks off. Because of the Summit I became active on Twitter as an educator (@mcarlingoldberg) and I noticed that many of the educators who I follow who are excited about learning new things and improving their practice were talking about going to EdCampEB. I looked into it and found that while a GAFE Summit is most definitely a conference, EdCamps were an un-conference and this intrigued me.

EdCamp is a free conference where educators decide on the day of the conference what the discussion sessions would be. Anyone could suggest a topic and everyone would vote on which they would like to have a discussion. It is often touted as an “un-conferecence”. I definitely loved having a say in what we talked about. For that matter every topic I suggested was picked as a session (others also suggested the same topics too). It was actually a conundrum when I had to pick between two of the sessions I suggested as they were scheduled in the same time slot.

Note: everything written before this was the first sitting. Everything after is from the second sitting. One sitting and post has to be my new habit. A post shouldn’t sit in drafts for two months.

I had a great time making connections at EdCamp. I think the opportunity to chat with complete strangers feeling safe in the fact that everyone there was an educator who was coding to give up their Saturday and were likely of a similar mindset. During breaks and over lunch I had great conversations about Bullet Journaling, and making connections at events. Most of those connections have continued over Twitter through conversations and sharing of resources.

I also got the great opportunity to meet up with several Twitter acquaintences face to face. I had the chance to chat with Mark Loundy (@MarkLoundy), Craig Yien (@craigyen), and some of the #Hyperdocs crew Lisa Highfill (@lhighfill ), Sarah Landis (@SARAHLANDIS), Kelly Hilton (@kellyihilton), and Karly Moura (@KarlyMoura). It was really a pleasure to meet them face to face after having interacted over Twitter. The genuine enthusiasm everyone showed when we managed to stick a face to the Twitter handle was just awesome!

What I really liked about EdCamp besides its energy was that it is all about educators having the time and space to talk about what matters to us in a relaxed atmosphere. I got to have really great conversations about topics that were important to me and self direct my learning.

One of the best parts of EdCamp is that after the day is over all of the shared notes from the different sessions are shared so that you can refer back to them and also take a look at the information from the sessions that you didn’t attend. Take a look at EdCamp East Bay’s Schedule.

Two sessions that I attended really stood out. The first was the Hyperdocs session (Notes) which was packed and included all three authors of The Hyperdocs Handbook. Talking with everyone about what a Hyperdoc is (a pedagogically strong way of thinking and designing lessons) and isn’t (a set of strict instructions or formats that you have to follow). The second was Engaging Staff In Change (Notes) a session on a topic that I suggested because I wanted to connect with others around the challenges in being a Tech TOSA and engaging teachers in accepting technology into their teaching in a strong, pedagogically sound way. There were only six of us in the session but we all came away with the support of a group of like minded educators who were having similar struggles. We also came away with a bunch of ideas, tools, and strategies to use in engaging our staff in positive change.

I would definitely recommend an EdCamp to any educator who is looking for a little support or a little inspiration for their teaching. It was a mellow, laid back experience with lots of great givaways and prizes. It was worth the hour drive from Petaluma to Concord to participate, and that says a lot.

And remember, DONE is better than PERFECT. Always, every time. Because done allows you to learn and grow and build on what you have completed. Perfect can’t be reached and if it is your goal it may very well prevent done from happening.

Shortly after I started my new Twitter handle for education (@mcarlingoldberg) I ran across Christine Pinto’s feed (@PintoBeanz11) she is an educator who teaches Transitional Kindergarten (TK) and is successfully using Google Apps For Education (GAFE) with her students. I have found my interactions with her to be very awesome and the resources that are starting to be shared around #GAFE4littles, the hashtag she started, are going to be very useful to primary teachers.

In order to save all of that wonderful information in a usable format I started archiving the #GAFE4littles hashtag as of today.

A searchable archive of the tweets can be found here: https://bit.ly/GAFE4littlesArchive

Please share this resource with all of your colleagues who teach primary grades they will get a lot from what everyone is sharing.

Unfortunately I wasn’t able to archive the tweets prior to 6/12/16. If you know how to archive older tweets containing a specific hashtag, please let me know, I would love to get everything.

UPDATED 6/21/2016:I forgot to include Christine’s site. Tech With Pinto.
Also, I managed to use Twitter advanced search to find all of the old tweets and Snagit to get a picture of it. Still looking for a way to pull the actual tweets to make them searchable.

END_OF_DOCUMENT_TOKEN_TO_BE_REPLACED

As of today this blog has existed more than six weeks, with no posts, and no title. This morning I found both snuggled up together. Please read to the end to find out where I found them.

Two months ago I had an experience that opened my eyes and changed my teaching forever. What was this experience? I attended my first (but not my last!) Google Apps For Education Summit (GAFE). It was hosted by EdTechTeam at Windsor High School on April 9-10, 2016. I am super excited about attending the next Sonoma Summit in October.

Why did the GAFE summit have such an effect on me?

There were two reasons. The first was all of the incredibly awesome information, resources, and connections that I made at the summit. It revitalized my teaching mid year and reenergized me enough that Monday, though I was tired, several people mentioned that I seemed much more upbeat. That high energy boost lasted all the way through the end of the school year.

The second and probably more far reaching reason can be summed up in one word. Twitter.

I have been on Twitter since the beginning of 2008. I followed the same people that many Twitter users follow. My personal friends, actors, celebrities, athletes, a couple of politicians, the President of the United States (@POTUS), etc. My feed was closed and it even updated my Facebook profile so I didn’t have to go to FB if I didn’t want to.

How did Twitter change me at the summit? I noticed that every single presenter had their name and their Twitter handle on their presentation. Not their email address. The GAFE Summit organizers encouraged us to tweet about what we saw and what we learned at the summit using the #GAFEsummit hashtag and to share it with the @edtechteam Twitter account. This is when I discovered Twitter as a Professional Development (PD) model.

END_OF_DOCUMENT_TOKEN_TO_BE_REPLACED 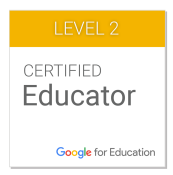 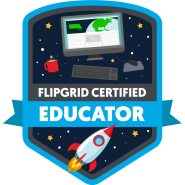